Why they were the hardest words

I have made it past my 10th anniversary of blogging and have no plans to stop any time soon. During the week I have marked the moment by picking my 10 stand out blogs from the past decade. Today (Sunday 19 July) I revealed what was my number one. As I have been reflecting on the almost 1,000 blogs and re-reading them it has been fascinating.

This has been a glimpse of parts of my life that I have forgotten. There are thoughts that I have not revisited and plans I had left in the past. Some of the words have made me smile but many have brought tears to my eyes. Among all that there was one blog that I have not looked at for three years but I can still vividly remember sitting down and writing it.

“This is the hardest blog I have ever tried to sit and write. I haven’t felt able to write anything for almost two weeks.”

It was a moment I spoke for the first time about dealing with the Manchester Arena terror attack that happened on 22 May. Throughout the days that followed that horrific incident it had been hard to find any words. It was impossible to capture the emotion that existed and the impact it had. I didn’t realise then that it would take me almost three years to reconcile some of the thoughts and feelings I had.

Dealing with that attack, and developing a response that was focused on people first, made me determined to encourage others to build humanity and empathy into their crisis plans. It was the reason I wrote the book, and is why I set up my crisis communication consultancy. I may not have realised it but that was a big turning point for me and has had a huge influence on the years that have followed.

I have found blogging a way of gathering my thoughts, working through issues, and sharing a different perspective. Thank you to everyone who has been part of my decade long journey in blogs. I hope you stay with me for the next 10 years.

If you have one of my blogs that had special meaning let me know by 8pm Sunday 19 July when I will chose one to win a copy of my book. 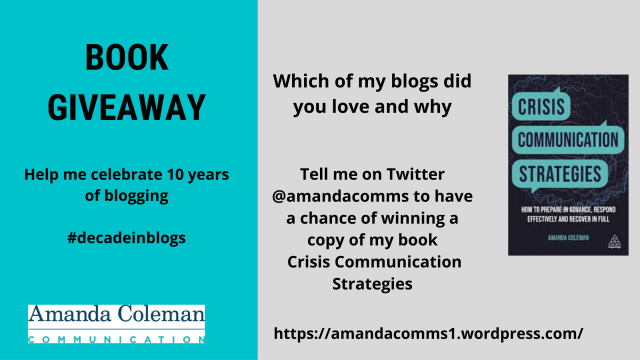